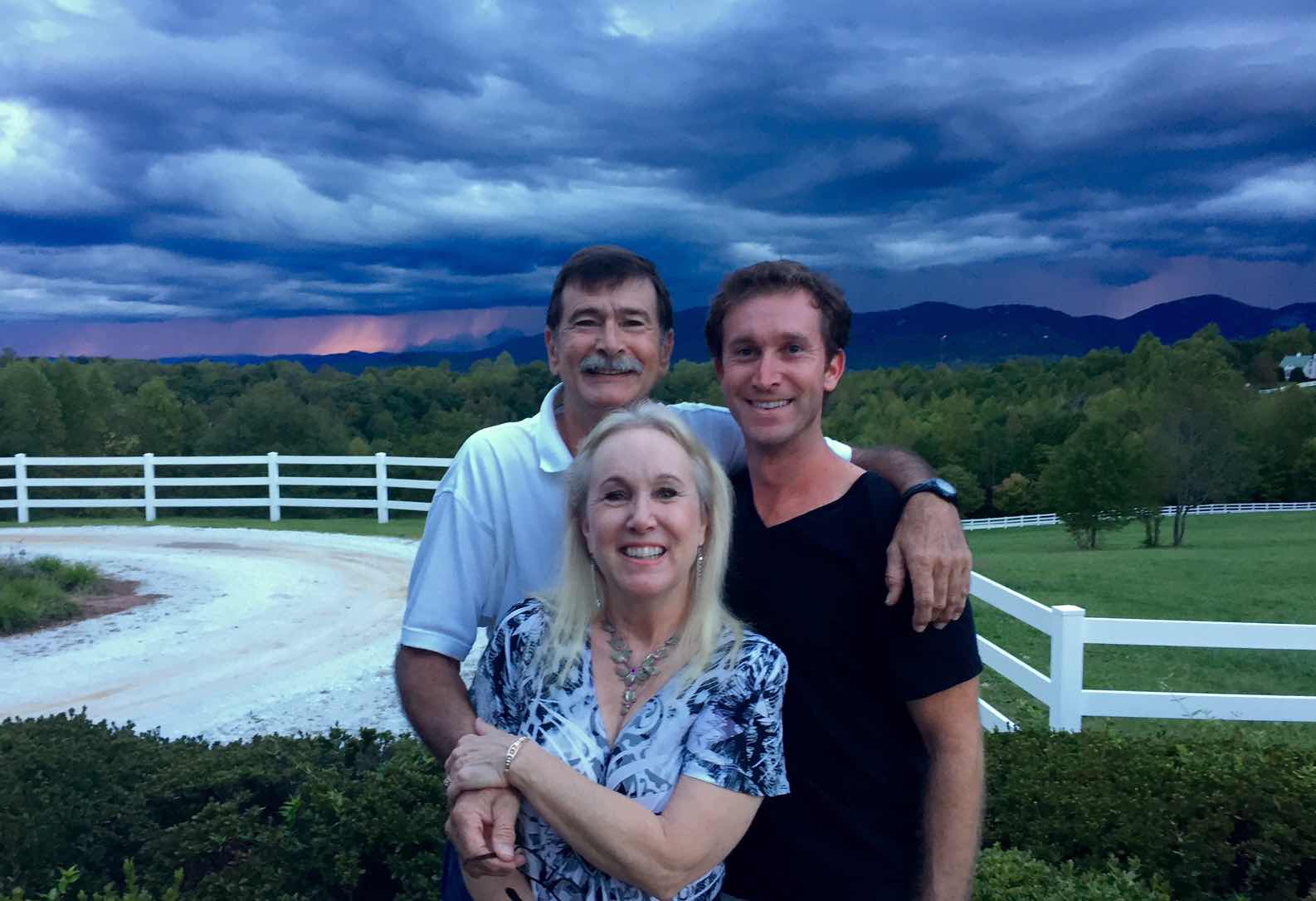 In the early 1990’s Mary & Roger Wolters purchased 160 acres in Green Creek, NC with the ambition of creating The Red Horse Inn on the bucolic property. The property already had two small rental houses on it, begging to be restored. Eventually, the two houses were renovated, rented and helped pay the mortgage on the property.

Creating the Inn had been a dream of theirs since they were newlyweds.

“We were young artists, newly out of college and with the fast pace of life, it was hard to find the peace, quiet and solitude to be in touch with one another and nature. We wanted to create an environment that embraced those qualities and give the guest a real sense of relaxation at a pace they created.”

The Green Creek property became Mary’s full time job, while Roger supported the family by inspecting homes for real estate purchase. Mary drove their two boys, Ben and Christian to school each day then proceeded to the property to build the pastures, put in fencing and create a driveway all while they waited for their 35-acre horse farm to sell in Gowensville. Once it sold, Roger planned to retire from house inspecting and work full time on building the Inn.

The “Blizzard of ’93” changed their lives with an outcome that borders on magical. The storm devastated pine trees that grew on an important piece of land central to the Greenville County Hounds Hunt Country. The 200 acres were owned by Bowater Paper Company that used the property as timberland. The company had been gracious enough to allow the entire neighborhood use of the trail system to horseback ride, walk, hike and enjoy. The entire neighborhood relished the use of the land and made use of it often.

Mary & Roger and their two sons lived around the corner from the Bowater land and it was crucial to the horseback trail system they used daily. A rumor circulated that a real estate developer wanted to buy it and build 200 houses. If that happened, it would destroy the trail system for the entire neighborhood and make it more difficult for the Wolters to sell their horse farm since there was a Recession in the early 1990’s.

Acting on the rumor, Roger began calling the Director of Forestry at Bowater to ask about the situation and to be informed if the Developer was going to buy it. If the deal began to form between the Developer and Bowater, Roger planned to get a consortium of neighbors together for purchasing the land to protect it and put it in Green Space.

Roger continued to call the Director of Forestry every two months for two years, while Mary continued to work on the two rental houses, pastures and fencing of the Green Creek property in preparation of building The Red Horse Inn. All the while, both Mary and Roger dreamed of owning the Bowater land just around the corner from them.

In the spring of 1995, Mary received a call from a friend that said her husband stumbled upon her Green Creek property and fell in love with the land and mountain views. He asked his wife to call and inquire if the Wolters would sell any portion since he loved it so much. He loved it so much he just had to have it.

Mary and Roger stayed up late that night and discussed the newest development and their situation. The bank payments were difficult and limited the family’s lifestyle significantly. They were also lamenting the loss of the bucolic piece of Bowater land that they had dreamed of for building The Red Horse Inn. The farm on which they lived had been on the market for a long time with no showings due to the Recession. They daydreamed of selling the Green Creek property and convincing Bowater to sell their land. At last, they “threw it up to God” knowing God would take care of them.

The next morning, the Director of Forestry called and said, “Roger, you know that property in Gowensville you’ve been calling me about? My CEO just came to me, said Bowater is in financial trouble, and I am to sell all small parcels. Do you want to buy that one?”

The answer was “YES!”

How could it be coincidence that Mary and Roger received a request to sell the Green Creek property a day before Bowater called? Was it luck, fate or something else?

The closing of the two properties went off seamlessly on June 1, which also happened to be Mary & Roger’s 21st Anniversary. They celebrated their anniversary with a second hand bulldozer being delivered to their new property. They could not afford to hire anyone to clear the stumps, put in the pastures and create the house sites. Thus, bulldozing became Mary’s full time job while Roger continued to support the family with his house inspecting business.

“You could say I was a real romantic. I bought her a string of pearls and a bulldozer for an anniversary present”.

Months passed and the bulldozing was going well. Finally, an offer for sale came in to buy the farm around the corner, which allowed Roger to start construction at The Red Horse Inn. With the help of two framers, Ronnie and Randy Campbell, their Uncle, Bud, and Ben and Christian Wolters the dream began. All worked tirelessly constructing ….first the Cottages and then The Main Inn.

Each cottage and room was created with its own theme and decorating style. Roger’s wood working talent is evident throughout. Marys’ decorating won them awards for décor.

While still in the building stages, the Wolters hosted guests and began to listen and learn what their guests enjoyed.

“Our guests told us quite clearly that they liked the privacy we had created. We built the cottages first and provided a basket full of breakfast items they could help themselves to. They just loved going at their own pace. Those comments came back to us again and again.”

Each cottage has a kitchen or kitchenette. Fireplaces, whirlpool tubs, TV’s with DVD’s, Satellite TV are standard. Three of the cottages have luxurious outdoor spa tubs. Cottage goers can also enjoy the relaxing sitting areas outside on their decks, patios and those cozy front porches with rocking chairs.

Each of the 6 inn rooms boasts fireplaces, whirlpool tubs and TV’s with DVD players. All of the rooms except the Aviary and Manger have satellite TV. Two of the inn rooms provide private balconies to admire the gorgeous mountain views; one of the inn rooms offers a private terrace.

The inn rooms have built in “kitchen-closets” which house a small refrigerator, microwave and coffee maker. Guests will find their gourmet breakfast of egg dishes, jumbo muffins and fresh fruit waiting for a “breakfast in bed experience”.

“We built a beautiful dining room never realizing that our guests cherished their alone time so much. We used to put out a lavish buffet, but the ladies would send their husband out to bring back a muffin and coffee to their cottage. Fortunately, we were still in the building phase of four of the other rooms and could build in the “kitchen-closets”.

“Hospitality is what the South is so known for and it’s so important to us that our guests feel how much we put in to their stay. We want our guests to know that we are here for them 24/7, or if they do not want to see us, we can just be invisible. This place is for them, for their time together. We want them to leave here with a feeling of complete contentment...to have a memory of The Red Horse Inn that will always bring a smile to their faces and a tender place in their hearts.”

“This is not a job; it’s a “calling.” It is almost as if I was guided ...as if I had no say in the matter. You know, this is the stuff dreams are made of...no... these are the dreams that reach out to all those souls that have shared time here…. in this place. Come, Welcome.”

“We have the privilege to make people happy, we help young men propose to their wives, we help couples Elope and we help couples get married or celebrate their Anniversary or Birthday here. This is more than a “job” to us. It is our Ministry and we feel that is why God made it all fall into place for us.”

A FEW OF OUR ACCOLADES

Travel & Leisure’s “One of America’s Most Romantic Inns”